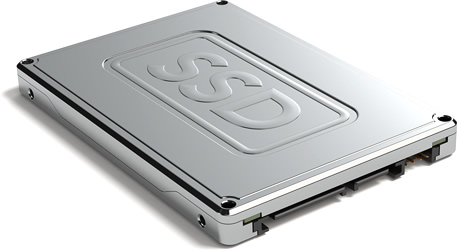 What is an SSD?

An SSD stands for Solid State Drive. Essentially it can be thought of as an oversized and more sophisticated version of a USB memory stick without any moving parts where as a standard hard drive which uses a mechanical arm with a read and write head to move around and read information from the right location on a storage platter. This is essentially is what makes the SSD so much faster than your standard hard drive.

Reasons to upgrade to an SSD

It’s a common misconception that slow machine speeds can be resolved by just simply upgrading the RAM in a machine. Although this does help it’s often also down to the speed of the hard drive. Tests show that machine boot times can be improved by up to 3 times faster. The average boot time of a standard hard drive is around 30-40 seconds whereas the SSD average boot time is 10-13 seconds.

Tests also show that file copy and write speeds are twice as fast on SSD over standard hard drives.

No data lose when upgrading.

When upgrading from a standard hard drive to a SSD there is no need to worry about data loss. Northern Star use software which will essentially capture an image of your entire machine and transfer it over to the new SSD.

Because a SSD has no moving parts it’s far less prone to failures. This also means that the SSD is a lot quieter than a standard hard drive.

SSD’s use less power which results in up to 30+ extra minutes while a laptop is running on a battery.

Because of the lower power draw SSDs and have and because it has no moving parts it also means that they also produce less heat.

SSDs are more expensive than standard hard drives but the price has now gone down quite a bit over the years making it much more affordable and the performance increase vastly justifies the cost of upgrading from a standard hard drive. Users can be more productive because of the time saved not waiting for boot times and are less likely to have failures